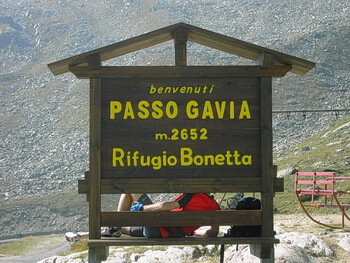 A frightened look to the sky in the morning. A veil of clouds is hanging in the sky. Looking down the valley you can see a dark cloud formation which seems to be moving our way. Is our luck with the weather leaving us? I discuss with David who also knows the weather signs in the Alps and we analyse the situation: no strong wind, no strong drop off of temperature overnight, the air pressure has stayed just about the same; nothing to point to a major swing in the weather. If it looked bad there's no way I'd go through the Val Rezzalo to the Gavia Pass. As we reach the turning to the Passo Foppa about 2 kms after Grosio the first peaks are poking out of the clouds which are slowly burning off. Question answered, we're off to the Val Rezzalo. To be on the safe side I'd e-mailed Alessandro the hut keeper at La Baita to let him know we're coming. As we're on our way he passes us in the car making his way to the mountain refuge. We're being waited for. In Le Prese the steep but technically easy climb to Fumero begins. The sun has chased off the last of the fog and is warming us up. There are more than enough places to find water on the way. At the end of the village in Fumero there's a car park and the gravel track begins. We wait until the last of the group show up. Uli has taken it easy and is the last to arrive. He's clearly well warmed up and with a refreshing "Auf geht's, Jungs!" he rolls on without stopping. His power and endurance astonish us over and over again. The steep bits start quickly which are covered in a rough concrete. The gaps have been filled up with gravel and sand. As far as I can I try to keep to the narrow strip at the edge which is better to ride on. Three quarters of an hour one has to torture one's self, but hen the high valley opens up and it's still a revelation that something so beautiful exists. At an altitude of 1800-1900 Meters there are a few farms scattered in the valley. There are no electricity pylons to be seen. A little bit of farming is being done. Many of the old huts have been carefully put back into working order in the last years and serve as weekend houses or holiday places for the townies to escape the summer heat. 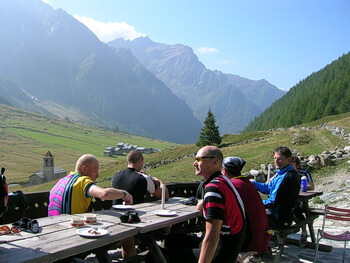 La Baita's terrace is bathed in sun. We slurp Latte macchiatos and enjoy the home made blueberry cake. I'm happy to see Alessandro again. We swap memories in a mixture of German and Italian and he tells me how the summer's been in the valley. He runs the only overnight possibility for transalpers on their way through the high valley. He gets his electricity from a little generator powered by water. In the last couple years more and more holiday makers come in to the valley encouraged by the various tour reports in the internet. If you want to stay the night here you should definitely reserve by e-mail before hand (www.rezzalovacanze.com) or call the day before, as the refuge isn't always manned. When planning a tour I always have a tough time deciding whether to stay in Grosio or at La Baita. Both have their special attractions but are unfortunately so close to one another that you have to choose. I guess that next time I'll have a change and go for La Baita. As we come to pay he waves it away "Mille grazie per pubblicitá!" - "thanks for the publicity!" he says to me. I thank him in return and say good bye for this year.
Freshly strengthened we resume the climb. For military reasons a road was laid up to the last farm at about 2200m and regularly kept in repair. Depending on your level of fitness and the weight of your backpack you may have to push a bit in the first of the steep passages. As to be expected Matze and Christian stay in the saddle to way up over the second plateau, but after the second bridge even they have to get off. It just gets too steep and the path goes partially over sheer rock. There's nothing else for it but to get off, push and enjoy the view of the Gavia massif's glaciers as long as they're still there. Ulli announces that he'd like to take a swim again in the ice cold mountain stream. This time he's even got a thermometer with him: it shows 6° Celsius. He's a crazy guy. 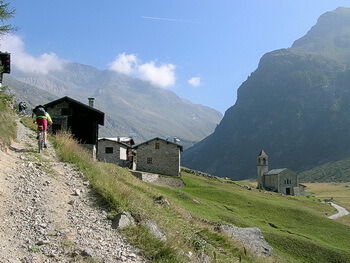 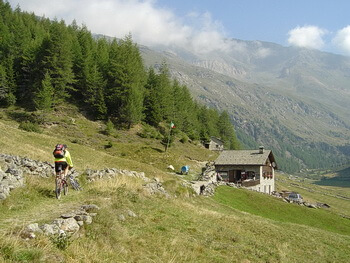 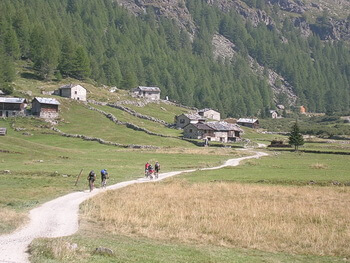 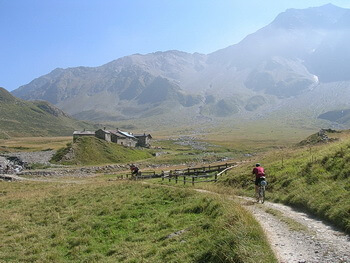 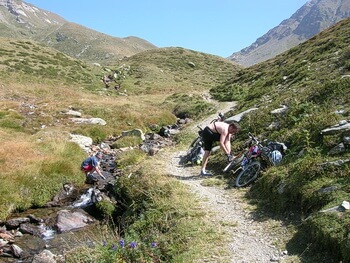 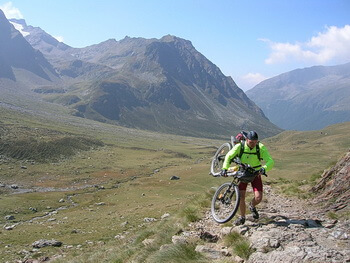 The last bit to the Passo dell'Alpe can be ridden again, I promised Ulli to take a photo of him reaching the pass and wait for him. Click, and the photo is done. The sun is shining, but a cool wind is blowing so no one hangs around. Instead we have a break in a wind protected hollow shortly after the top of the pass. Next to us a glacial stream is murmuring, and there's no one else in sight, which makes us all the more surprised when we hear the sound of a helicopter. it's a few hundred meters away and flying past at eye level. Soon it's all quiet again, just broken by the odd whistle of a marmot. It's hard to make ourselves start again, such beautiful days high up in the mountains are seldom and should be enjoyed. In the end we manage it and roll down to the Gavia Pass road.

This is where the asphalt climb to the Rifugio Berni at the top of the pass starts. Everyone goes at their own speed. Shortly before the end the road gets relatively flat by the lakes. This is always a signal for a little race when two bikers aren't far from one another. I keep peddling, Olaf is in my wind shadow and wants to get past. I think to myself, let him take the mountain points and want to let him go ahead. He takes this as a sign to go on together, which is what we then do.In front of the mountain restaurant we toast ourselves in the strong sun, surrounded by proud conquerors of the pass: racing bikers, cabriole fans and the unavoidable convoy of motorbikers in black leather. The descent from the pass starts with a fast ride through a moonscape. Huge boulders lie left and right of the road. At the tunnel which we pass on the right we catch a glimpse of the old gravel road that the Gavia was until the end of the 80's when it got asphalted. At that time a huge landslide blocked the road to Bormio. The Gavia pass was the only way there from the south. David remembers it in it's original state. At that time though, he did it by motorbike. On the rocks we study the inscription on a commemorative plaque. It's more than 50 years ago, when in 1954 54 Alpini died. The driver of a military truck lost control and killed the young soldiers. Fresh flowers show that they are still thought of. Pensively we look into the several hundred metre deep ravine before we move on. On this side the road is sometimes so narrow that only one car could pass. In the lower part it gets wider again and we race on with high speed down into the valley.

At the Albergo Pietrarossa we regroup. We postpone the ice cream eating to Ponte di Legno. Before hand we check in to the Hotel Frigidolfo, at that time the only hotel in Precasaglio (not recommendable - much better: Da Guisy in Pezzo).
Tomorrow Montozzo is on the agenda.Freed of our luggage, riding is easy. In Ponte di Legno we get a delicious ice cream opposite the one star hotel the Albergo Cervo. The hotel manager rejoices and hopes that we'll be staying with him. We're going to have to disappoint him as we've already made our choice for the day. If you can remember the old French film with Fernandel, a remake could be made here. I don't mean this as a criticism, I stayed here once and was perfectly happy, the food was good and the mountain bikes were given a safe place for the night. David and I treat ourselves to a beer, the free seats on the market square were just too enticing. The price however, exorbitant. Back in the Albergo the bike group we met on the first day in Landeck wanders in. They obviously take the whole day over things. For example in Grosio they only turned up at around seven thirty as we were sitting down to dinner. It gets dark, we go to bed early as tomorrow the next highlight is waiting for us. 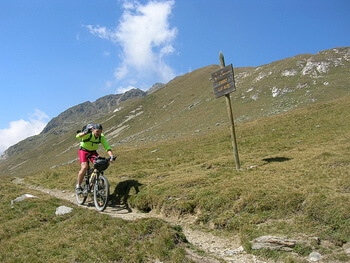 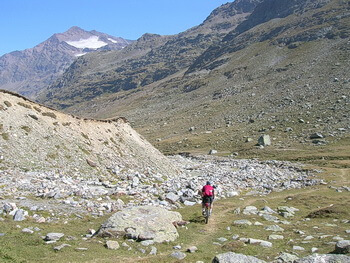 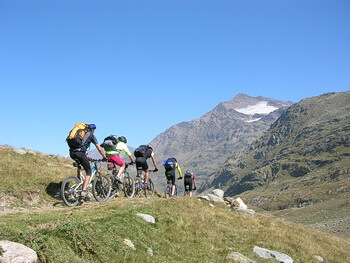 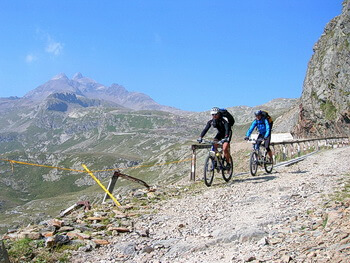 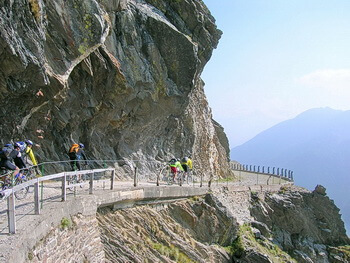 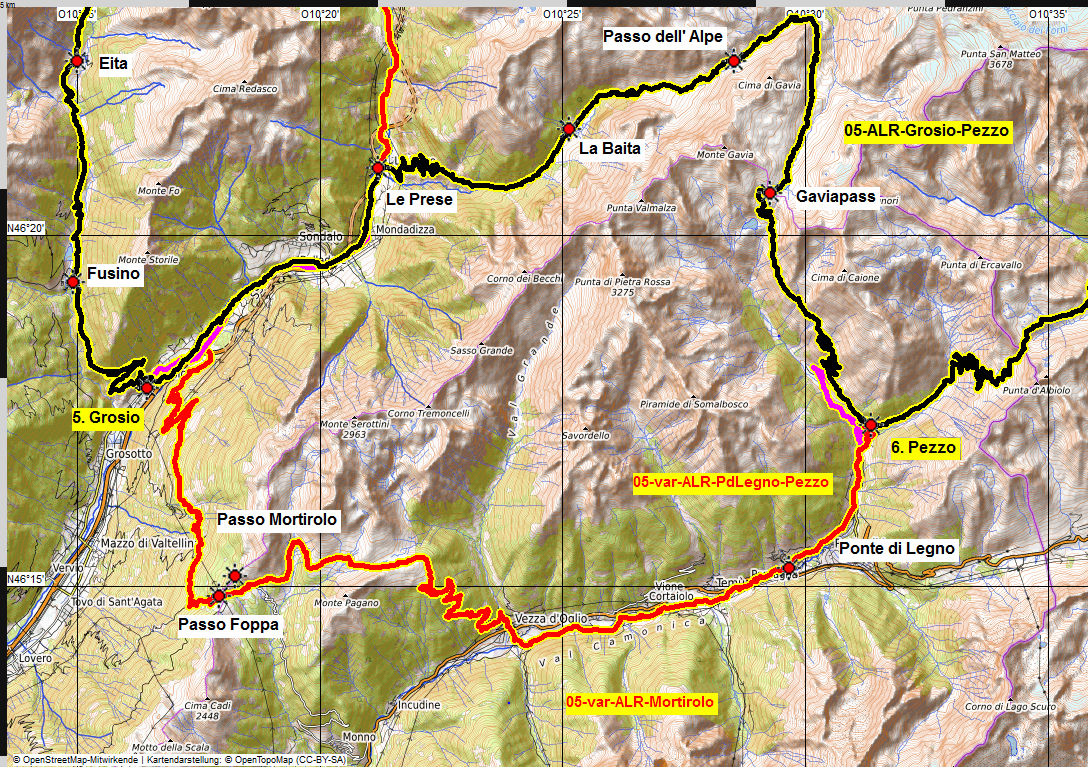 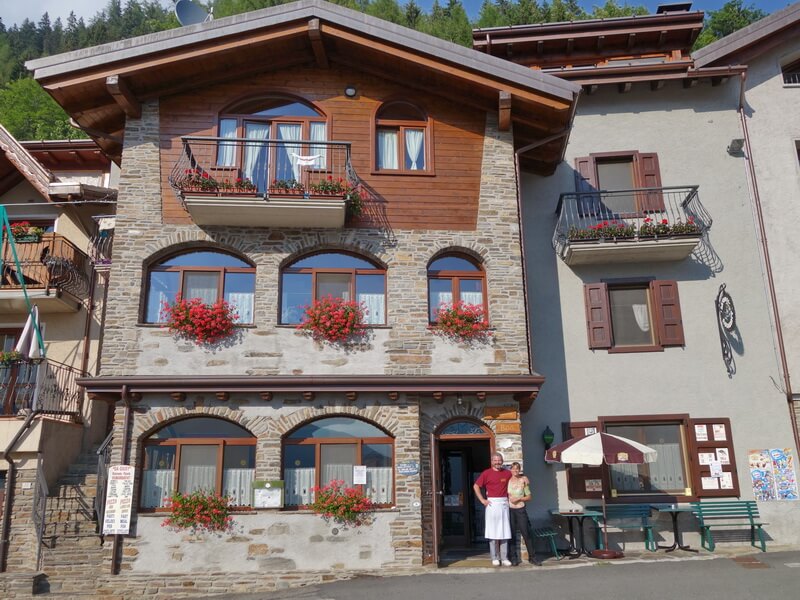