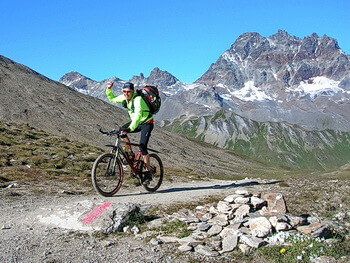 Looking forward to this great day. 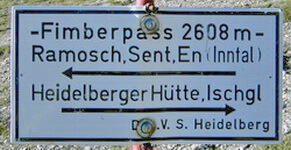 It's still cool as we climb onto the bikes. The sun bathes the mountain peaks in a red light and slowly makes its way down to the valley bottom. The gravel track is good to ride on, sometimes steeper, sometimes less so. After not too long we cross the border between Switzerland and Austria, the only marking, a cast iron sign on a pole: the border isn't watched anymore. Still, at least officially we're leaving the euro zone. In Engadine the European single currency has long been accepted next to the Swiss Frank as a second currency though, and often I've even received my change in Euro cents. We keep having to stop to take photos as the morning light is so good. After about an hour we reach the Heidelberger Hütte. All the bikers who spent the night are already on their way and we have the climb up to the Fimber Pass to ourselves.

On the way to the pass there are a few places where you have to push, but it takes barely an hour and is rideable in part. In the middle ages Ischgl's dead were carried over this pass to the graveyard in Sent in Engadin: for centuries the Paznaun valley was part of the municipality of Sent. In winter the pass was inaccessible so the corpses were left out to freeze and got buried in Sent in the spring. In crossing this border we also cross the first language border of our tour, in the Engadine they speak Retro Romanic ("romantsch grischun"), the fourth official language in Switzerland which has its routes in Latin. Hikers and bikers greet each other with "Allegra". (info by: Cla Rauch - village Sent). 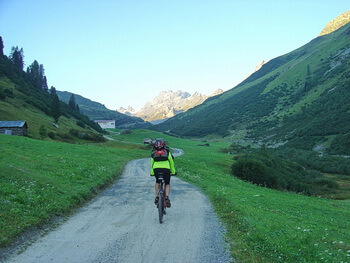 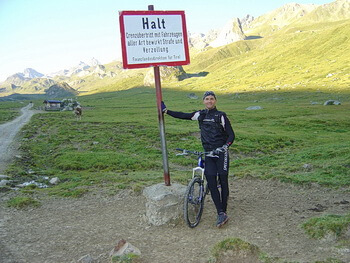 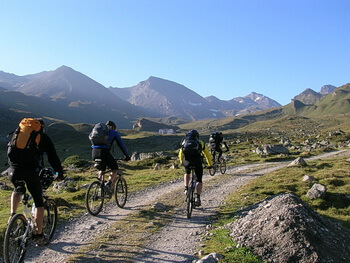 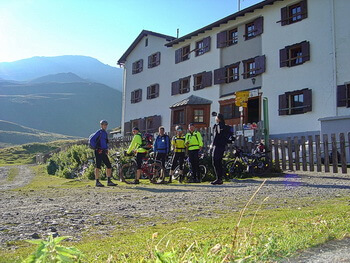 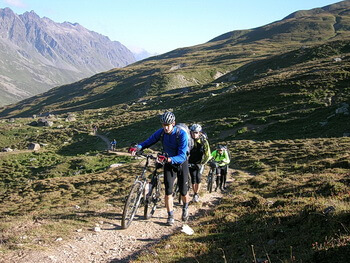 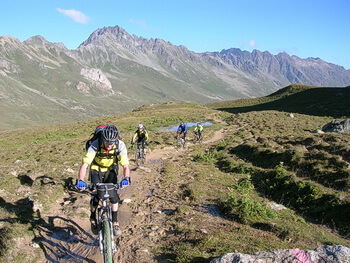 We regroup at the pass and are all amazed by the wonderful panorama. The following downhill on the easily visible path is one of the legendary alpine trails. To reach the tiny Alp Chöglias you have 500 metres of descent to get through. The amount you're going to have to push depends on your technical ability and the ground conditions. Today the trail has perfect grip - not to wet and not too dry and even I manage the majority of it. Skilled downhillers will manage almost all of it in good conditions. The path is partially washed out and has rather abrupt edges, but as long as you pay attention it shouldn't be too problematic. Later you cross an "adventurous" bridge and a glacial stream and finish on a bumpy forest road to Griosch. From here we took a good natural road towards Vna.

Shortly before the village we take a sharp right towards the Kurhaus Val Sinestra. Later the track through the meadows divides. A sign shows that the lower left hand path goes directly to the Kurhaus. A little later it becomes a tricky path, full of roots with a crumbly sides, following the edge of the stream and heading steeply downhill. The upper right hand path on the other hand (signed as "Panoramaweg") also takes you where you want to go. It also has a few roots, but in the main is a passable trail, making you get off the saddle only every now and then. After a right curve you have to pay attention, there's a rock fall with about a 1.5m step in it. I wouldn't risk it. 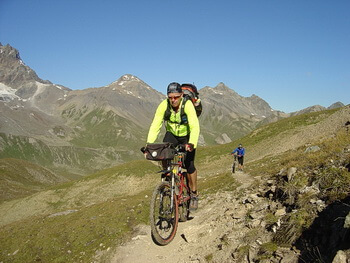 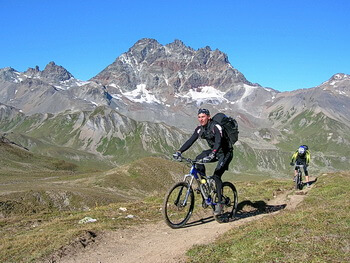 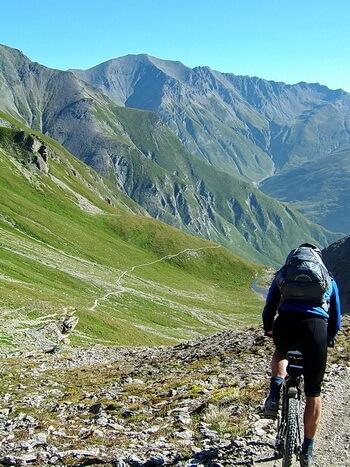 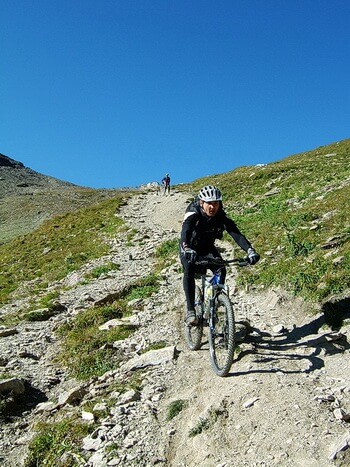 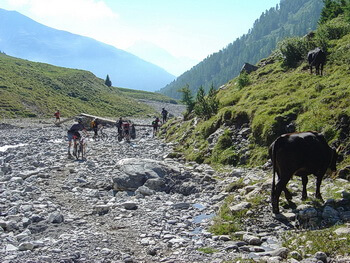 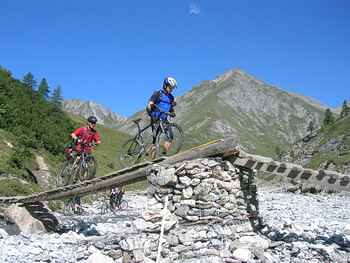 From the Kurhaus there's a nice track running high above the Inn Valley to Sent with a direct view into the Val d'Uina. From Sent you have a high speed downhill along the road to Scoul. If you want to stock up in Scuol's supermarket you'll have to get there before 12:15 when they baton down the hatches for a siesta. The climb to S-charl is just hard work. The village well doubles as a bus stop and is a natural meeting place. If you want to (or have to) save your strength you can stick your bike in the boot of the bus and get a ride. I suggest to HaPe that this may be a good idea, but his ambition wins. Unfortunately he doesn't do his knee any favours and on the following climb to Alp Astras and it swells right up. He can't go on and has to roll back to Scoul. David brings us the news as we wait at the Alp Astras. We had decided that In such situations we would have to make clear decisions. By SMS HaPe tells me that he's taken a Hotel room in Scuol and will be picked up by his niece. It's a shame he had to stop, next year he wants to try again, hopefully then as finisher.

From Alp Astras' terrace we can see way back over where we've come from, through idyllic mountain meadows with a lively burbling stream. There was only one steeper bit that could bring you out of breath. The high plateau leading to Alp Astras became a race track, Christian and Matze were the winners. The beautiful trail through dwarf pines leading to the Pass da Costainas is just fantastic. One of our group nobly opens and closes a gate so that the rest of us can say that we reached the pass without leaving the saddle. I still love this, the only way of getting over the main Alpine chain in the saddle without having to resort to an asphalt road. Really a pleasure for all who've had enough of pushing through unrideable terrain. 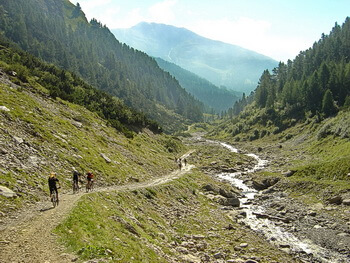 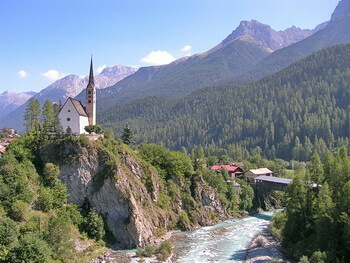 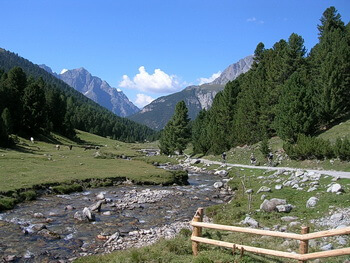 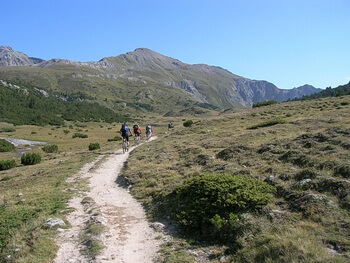 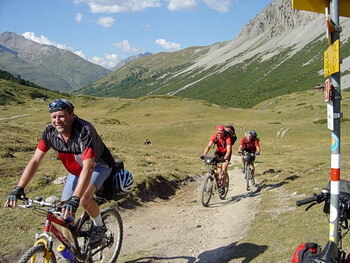 The following downhill starts with a short, very steep gravel bit. Unfortunately Olaf makes acquaintance with the dirt. A couple large grazes decorate his arm and shin for the remainder of the tour. As we reach the meadows our difficulties are forgotten. We have a dream of a downhill on good gravel to Lü waiting for us. Visibility is fantastic, the Ortler with it's thick snow cap seems so close you could touch it. Photo break. Shortly after the hamlet my front disk break starts to squeak terribly, the break lining is completely worn out. Luckily David has a replacement lining which fits, I was so daft not to check if I had a spare before starting the tour. One learns from one's mistakes, It won't happen again.

Thanks to the warm late summer weather the obligatory pasta party in the youth hostel "Chasa Plaz" can take place outside. I phone HaPe in Scuol again who understandably is disappointed about having to drop out of the tour. I cheer him up, as much as I can and have no doubt that he'll make it next time. 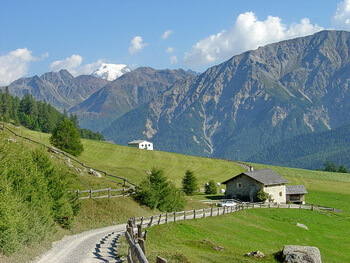 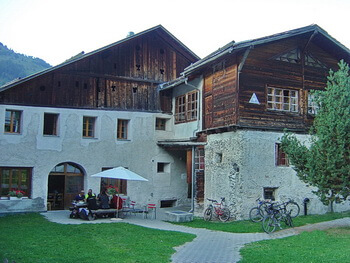 · If there's a risk of snow on the Fimber Pass stay in the Inn Valley and go over the Reschen Pass.
· or you could try the Val d'Uina 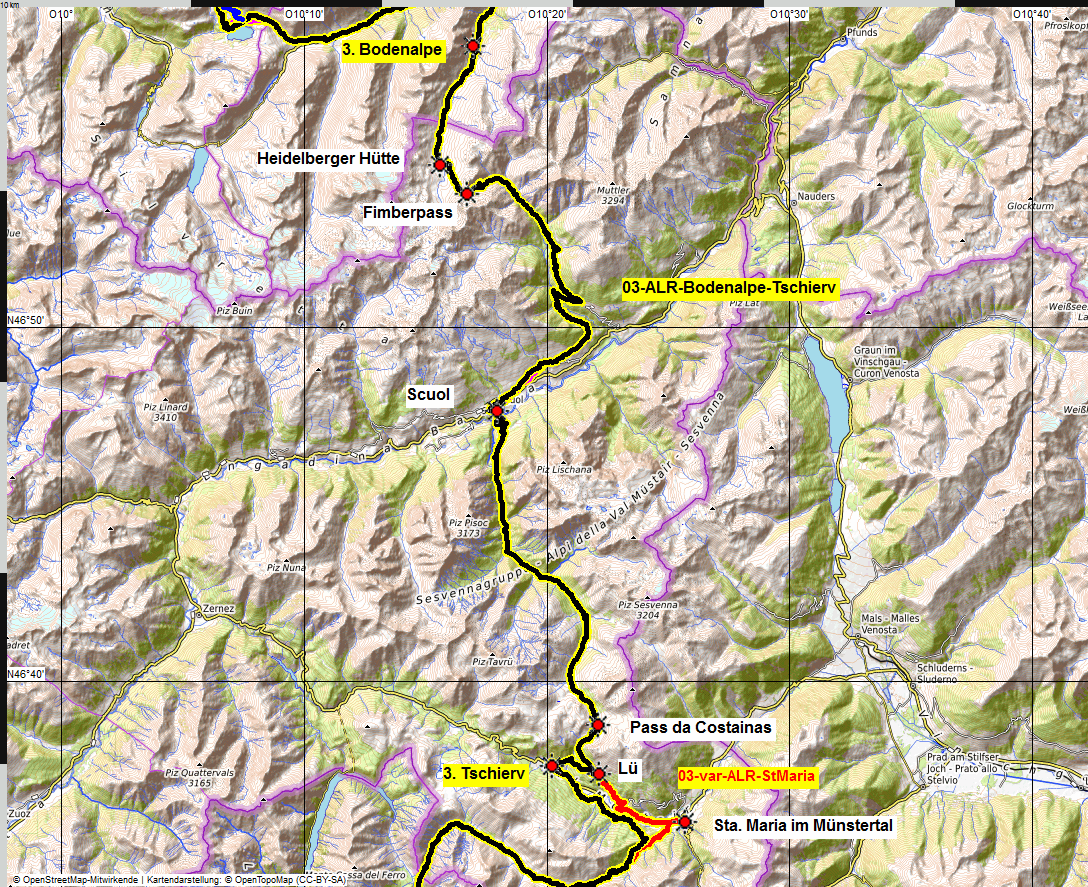