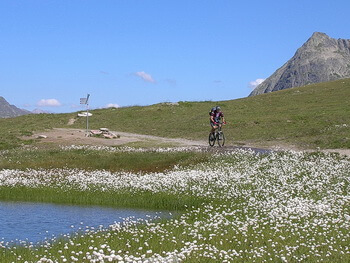 To the others Lake Garda still seems far away, but as I think through the stages and look forward to all the highlights awaiting us it already seems close. My plan for the second day takes us over St. Anton, through the Verwall Valley towards Ischgl. It's a good choice in good weather, even if you have to just eat up kilometres at the beginning. As far as St. Anton we more or less roll along the road or hard shoulder. Once the tunnel between Pians and Flirsch opens the traffic will get better. As we turn off into the Paznaun Valley Uli and HaPe say bye for the day, they're cycling the shorter route to Ischgl as both had knee problems in the past few weeks and want to take it a bit easier today. Uli remembers the way from last summer, and we'll meet up again at the Bodenalpe. They send me an sms around midday to tell me they've arrived. As expected the traffic is lighter from Flirsch on. From here you could take the back roads which are used for cross country skiing in winter, but it's not really necessary. In St. Anton am Arlberg we stock up in the supermarket, I've got into the habit of eating little and just small portions during the day. On the whole we just make short breaks as it's easier for the endurance. The body has to cope with prolonged low level strain, but thankfully isn't permanently asked for maximum performance. In good weather it's really no problem stopping every now and then for a banana break or to eat an energy bar. In the next few days we find ourselves stopping more often on the down hills and flat bits, as much as anything because the imposing mountain scenery forces us to. After the village we turn left at the Hotel Mooserkreuz and into the Verwall Valley.

I first cycled along here in 2000 and remember feeling rather nervous about what awaited me on a transalp. Today I'm more relaxed and enjoy the slow transition into the mountain world. After an enormous building site where they're putting up a power station we have the Verwall Valley to ourselves. It is a so called U-shaped valley, which has a relatively soft climb up to the tree line at around 2000 metres. Before long we reach and pass the Konstanzer Hütte, taking a break so early on wouldn't be wise, it'd just make things twice as hard later. At the Schönverwall-Hütte the good gravel track comes to an end. The group isn't far apart and we dribble in not long after each other before making our way on to a wooden bridge. Up to here the trail is good but after the bridge comes the first of the pushing / carrying passages on the way to the Heilbronner Hütte. Before it gets really irritating we reach a high plateau. We pass the picturesque Scheidseen and beat the last climb to the Heilbronner Hütte. Matze and Christian ride it all while the others mostly push the last steep bit. On the terrace the sun beats down as if it were high summer. I eat a bowl of soup not wanting more. 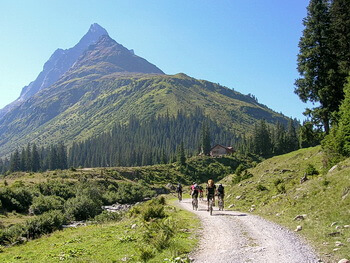 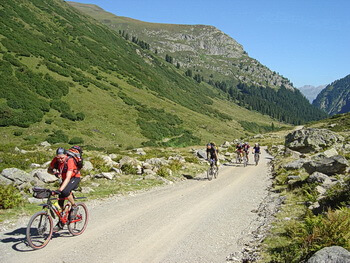 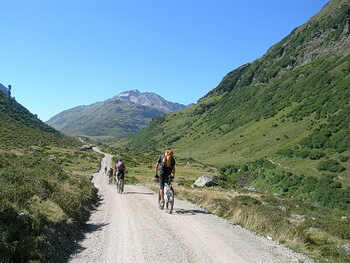 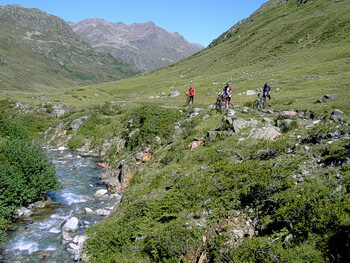 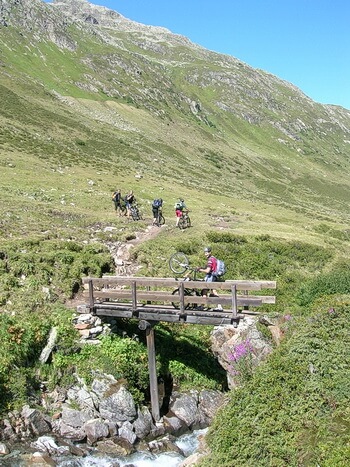 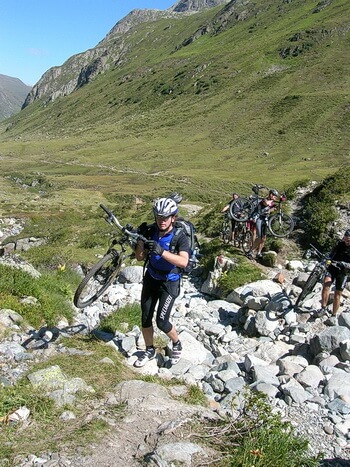 The downhill to the Kops reservoir is a dream in this weather, there are no technical difficulties and we roll on, stopping every now and then to take in the view of the Silveretta group. After the Verbellaalpe you have to pay attention not to miss the steep uphill going off left after the barrier up to the reservoir. To keep going down hill and right towards Partenen may well be tempting, but doesn't really help - you'd then have to carry on over the Schlappiner Joch as, for example, the Heckmair route does. It has it's attraction but then maybe you should be consequent and start in Oberstdorf. We grind up a short steep uphill, a few hikers coming in the opposite direction give us moral support to get over the annoying slope. At the reservoir we stop for a moment, the water is a milky sky blue due to sediment. Shortly after the way up to the Zenis Joch you can get around the lake by turning left by the restaurant on the footpath. This brings you out directly on the mountain bike track heading for Galtür, which you can also get to on the road. In this case you would turn left shortly after the top of the pass; the orientation point is the toll free road to Galtür.

A short comment on the Zeinis Joch: it seems to get it's name from a local word for the tears of the Tyrolean children. As late as the 1940s many had to leave their terribly poor homeland to go into service in Swabia. They would say goodbye to their families and be handed over to that time's version of people traffickers here at the top of the pass. Today it's hard to imagine the levels of poverty prevalent in the Alps not so very long ago. In the at that time rich and powerful Germany some "employers" became the all-powerful rulers over the lives of the people they'd in effect bought. Luckily with the outbreak of the Second World War this terrible tradition came to an end. Today we Germans could learn a lot from our Austrian neighbours about steadfastness, hard work and especially the ability to adjust to outwardly changing circumstances, most of us are simply no longer able to do this, but enough of the historical digression. Here and now we enjoy the fast downhill to Galtür which soon comes in to view. You can clearly see the reinforcements which were built after 1999's avalanche catastrophe and hopefully will protect the village from a repeat performance. We clearly see the slopes where the avalanche started. They have never been forested, and are also not covered by ski lifts. It was an unlucky chain of events which after days of heavy snowfall brought the "white death" into the centuries old village. After Galtür we keep on the cycle path next to the Trisanna, going downhill. By now we've got used to the hoards of cycle tourists. The path is well signed and there's no temptation to just take the road. Shortly after Galtür you reach some white houses which stand by themselves (Apart. Alexander). Here I really recommend that you don't take the officially signed bike route , but the gravel track that goes to the right, following the Trisanna. It takes you through a magical narrow ravine where the rock walls feel like they're pressing in on one another. Next to the stream there's just enough space for the track. Heaven only knows why the official route ignores this way. 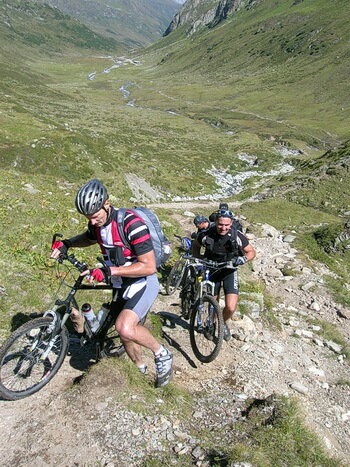 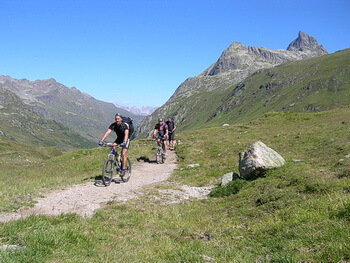 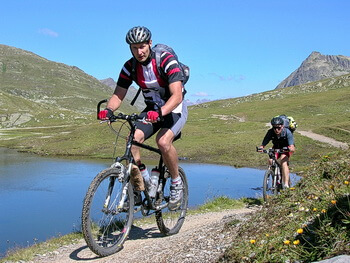 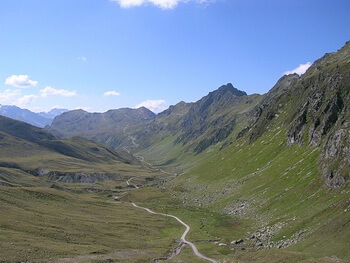 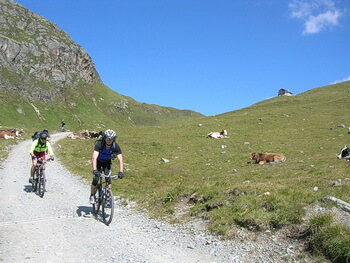 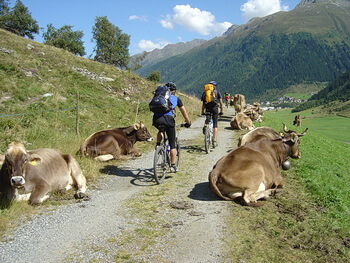 Above the village of Ischgl we reach a turning into the Fimber Valley, the end of the line for us today. Taking this way you save yourself the first bit of the tough final climb. In the first hairpin bend we reach the main track and grind the steep but definitely rideable way up to the Bodenalpe. We've chosen to stay the night here, and not at the Heidelberger Hütte like the majority of bikers which has become way too crowded for my taste and has none of the mountain hut romance left. Once I counted more than 80 mountain bikers there, along with around 100 hikers from the Heidelberg section of the German Alpenverein who unfortunately had a fondness for singing. The remote isolation of the Alps as mass experience. The young landlord Esma of the Bodenalpe gives us a warm welcome (something you don't necessarily get at the Heidelberger Hütte) and we go to find our rooms. The rooms are newly renovated and have there own bathroom and TV; even our sweaty bike clothes get washed and dried overnight. The evening meal and breakfast are both good (and large), and in general it's very good value for money. Conclusion: highly recommended. 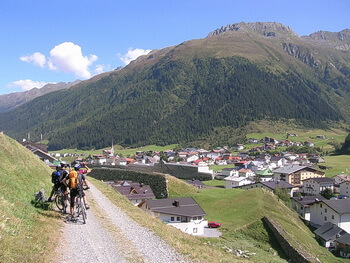 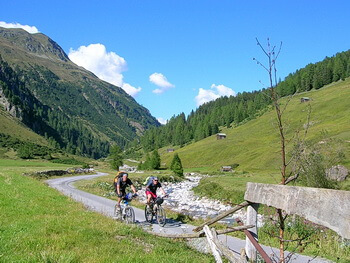 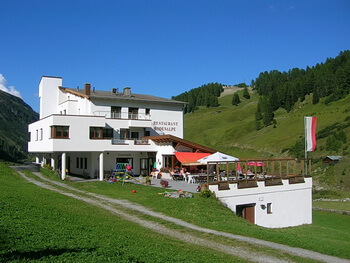 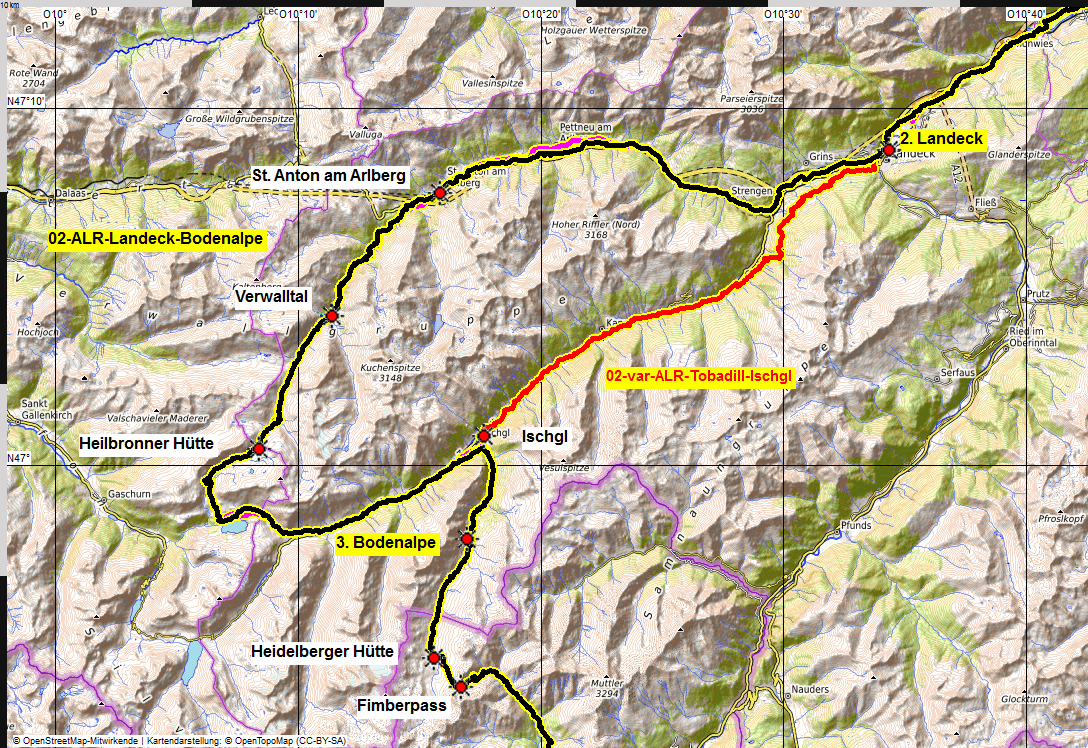