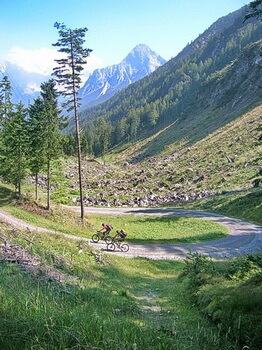 By now this route is burned so well into my mind I could easily cycle it from memory, still safe is safe, and I pack three A4 pages of road book and 18 sides of scanned maps into my pack. I rarely actually look at them, and then it's only to see how we're doing for time. This is a good group - we met up on Lake Garda last Easter and have ridden a few tours together. We all work well together as people which is one of the most important things for me, especially after my predominantly positive experiences in the past few years. Garmisch-Partenkirchen in southern Germany is our starting point where we meet on a sunny late summer morning in September at the car park behind the train station. It's a Sunday which has the advantage that we'll be more or less alone, most groups starting on Saturdays. Only one other group is riding parallel to us, and as it turns out when we meet them again that evening in Landeck, they're using my road book.

Slowly all our group members arrive at our chosen meeting point - the Garmisch Partenkirchen train station, and we leisurely set out in the direction of the Zugspitze. This first stage is really good for getting into things, everyone can find their own rhythm. There is a little of everything: rough gravel, tricky trail passages, easy stretches to just ride, up hill, down hill, but not too much at any one time, and of course forests, lakes and the Alpine mountains. With this wonderful Indian summer weather, it's a treat for the senses and it feels great to be getting some sun on the skin. From Grainau a cycle road runs parallel to the Loisach towards Ehrwald. At first it's asphalted and later turns into a good logging road that often runs near to the busy main road. In Ehrwald we reach open land again, cycle across the meadows and after a few hundred metres turn left. At the round-a-bout at the end of the village you take the short, steep ramp going up to the left which brings you to a scenic route going through light woods and crossing a ski slope near Biberwier before reaching the Via Claudia at the Weissensee Lake. Here you meet the first steeper gravel hills on the old trade route. 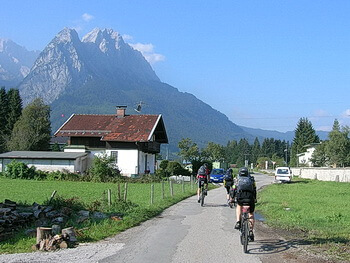 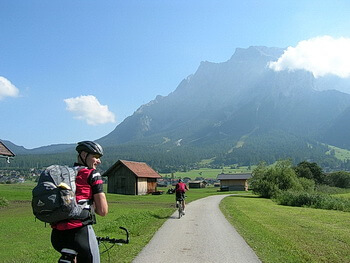 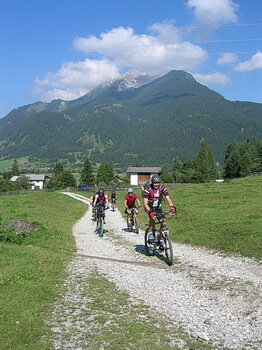 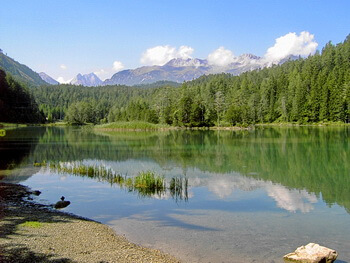 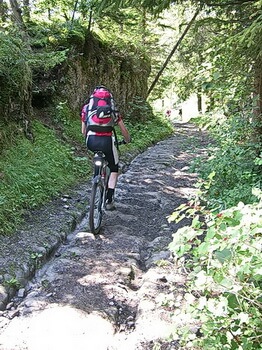 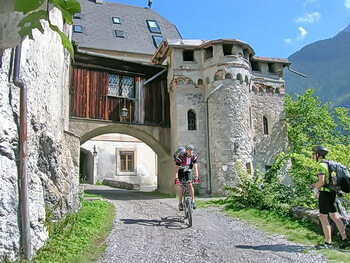 When we reach the old Fern Pass we can see a snake of cars crawling towards Imst on the road below us. We're free of all that, and race down the gravel track. As we cross the road we have real trouble finding a gap in the relentless traffic. Without doubt, the most impressive bit of this first stage is the exposed stretch of the ancient Via Claudia running high up over the Fern Pass lakes which shimmer turquoise blue below us. Deep ruts have been carved into the rocks by the iron rimmed wagon wheels of the Roman carts. The path has been rediscovered over the last few years by hikers and bikers. A few mountain bikers approach us in the opposite direction fighting their way up hill.
The way to Fernstein Castle has partially a trail character. The Bavarian king Ludwig II kept two rooms at the castle inn as he was spellbound by the romantic magic of the area with its deep blue and emerald green lakes. In winter, by full moon he would drive his sledge from Neu Schwanstein, his fairy tale castle, over the Fern Pass to Fernstein. With the building of the modern road in 1856 the old Fern Pass became obsolete and was left to disintegrate, which despite the fact that it has been repaired and maintained for the many bikers and hikers you can still see at a few narrow and exposed bits along the rock walls. Today the threatening weather doesn't leave us with a lot of time to look at the old Roman caravan tracks which have been carved deep into the rock. For us now it's almost all downhill. We go past the Imst's modern church and reach the cycling road to Landeck at the banks of the Inn river. We waste no time and cycle on in formation. Olaf provides wind shadow, he does a lot of road biking, as I used to, and we make good speed. No one wants to be the first to break ranks, but it's not actually important to any of us to arrive first. We stop for water shortly before the finish and regroup. A nun we thought we'd zoomed past rides leisurely by, I guess we weren't so fast after all! On we go, and soon we reach the Hotel Mozart in Landeck. 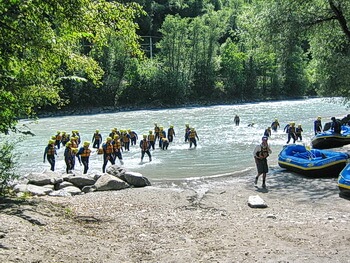 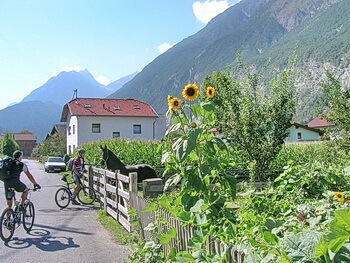 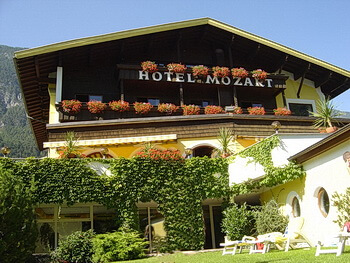 The hotel pool and sun terrace are waiting for us. The weather forecast is excellent and we're looking forward to a delicious evening meal. Since I've been staying here I've had to somewhat amend my evening attire: light micro fibre trousers and a t shirt that isn't too bike-like. Landeck is a strategic point on this transalp: no matter what the weather you'll go this way if you've started in Garmisch. If the weather looks bad (for example, there's risk of snow on the Fimber Pass) you can proceed from Landeck by riding along the Inn Valley, like I had to in 2001. I joke around with Thomas Radlbeck the hotel boss, who I got to know at a trade fair in Erfurt a few years ago and always look forward to seeing again. Thomas is my idea of a typical Austrian, a breed I've learned to value: dependable, professional and always welcoming. He tells me that more and more bikers are using his hotel, some real characters. It is commented on that some turn up to dinner bare foot and in their underwear due to a lack of dry clothing which doesn't overly impress the other guests or his mother, the senior boss of the house, so a word of warning: not too slovenly in the Hotel Mozart , but you don't have to go as far as suit and tie… 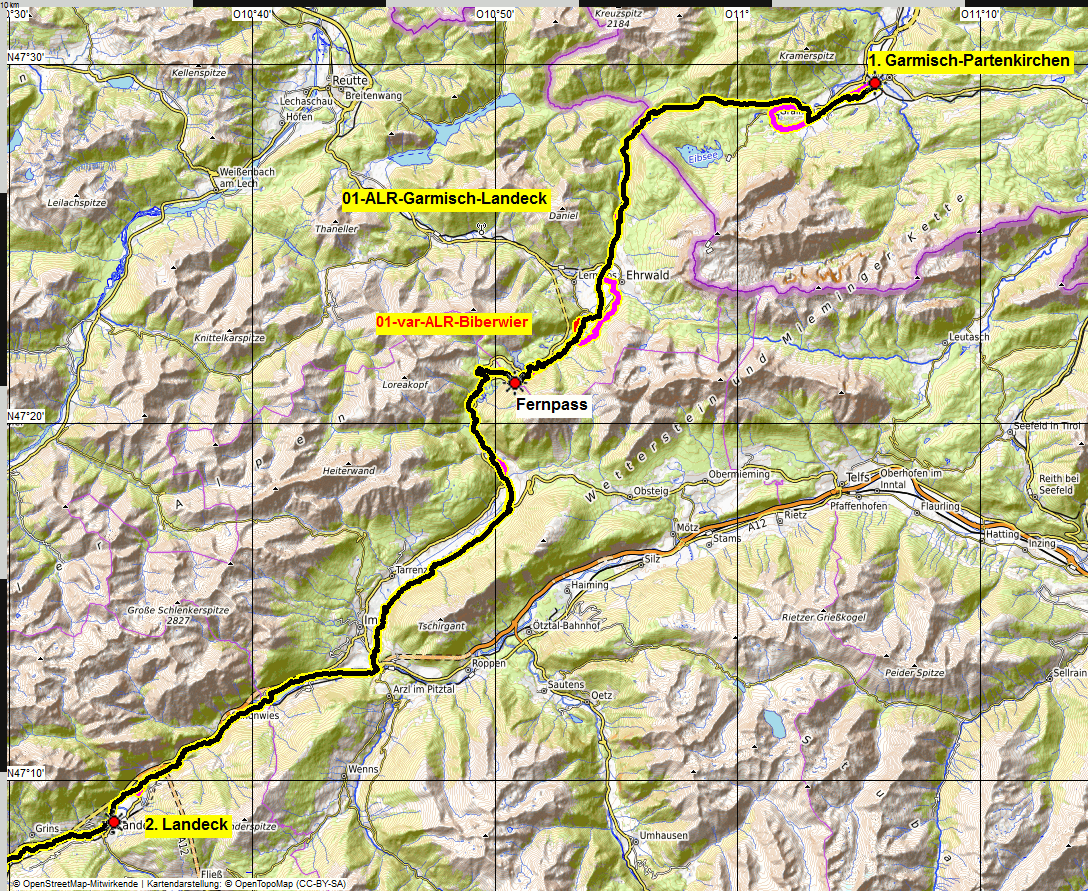