tour report (translation by Katie Stephens - thank you so much) 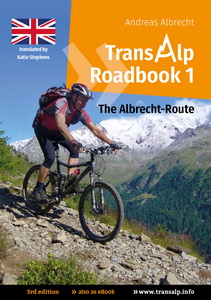 I got the transalp bug having completed my first one in 1994, it started years of experimentation looking for my perfect route. Year by year, tour by tour I've honed it and since 2000 think I have been on the right track. Now, a few years later, I'm happy, everything fits together : the route, the group, and even the weather's cooperating. 7 days of sunshine are predicted, clear blue sky and not too hot, it couldn't be better. Whilst planning the tour I based our departure date on the moon phase (well, it couldn't hurt now, could it?) and we set off at the end of a full moon, as this is meant to bring the most stable weather. With a lot of jiggery-pokery I've managed to work into the route all the highlights that I've ridden in the last few years. Internet feedback and talking to hotel owners in towns at the end of stages confirm that since I started posting my tour reports the web numerous mountain bikers have taken up my suggestions, and done variations of my transalps starting in Garmisch. At first I was astonished by such a response, then naturally very happy that so many people had followed one of "my" tours. They are all made to my concept of how one should mountain bike in the Alps. I want to be able to actually ride as much as possible, also or rather especially in the high mountains. Getting off and pushing your bike should be kept to a minimum; I get really irritated by having to drag my bike, particularly downhill and it seems that I'm not the only one. I've always made sure that there's an alternative, bad weather route, so the tour doesn't have to be called off, but luckily have rarely needed them. On this tour I could have saved a good 2 kilos in my backpack between unneeded waterproofs and winter stuff, but better safe than sorry.